In the 3rd quarter of 2020, Romanians were the only foreign nation who bought less property in Spain than three months before.

Still remaining in top-6 most active foreigners in Spain, Romanians bought up 4.79% of all Spanish real estate purchased by non-Spanish buyers. Overall, during the last year and a half, there is a downward trend in Romanian demand. Analysts from overseas property broker Tranio explain why.

In the 3rd quarter of 2020, foreigners bought 11,400 Spanish properties, which accounted for 11.39% of the country’s residential real estate. This is shown in the most recent quarterly data from Registradores de España – Spain’s land registry.

Romania rounded out the top 6 foreign purchasers after the UK, France, Belgium, Germany and Morocco, buying up 4.79% of all Spanish real estate purchased by foreigners. In the previous quarter, their share amounted to 6,9%, making Romanians third the most active foreign buyers. These amounts have meant reaching 564 purchases in Q3, compared to 552 in the second quarter.

The statistics show that the peak of Romanian demand was in the first quarter of 2019 when the number of purchases was 979. Since then, the demand was slowly declining. The second quarter of 2020 brought the smallest number of purchases (552) since 2016. Undoubtedly, the coronavirus crisis, with the restrictions on mobility and economic instability brought a significant change to the property market. All these circumstances inevitably affected the interest and ability of Romanians to buy foreign property.

During the last five years, Romanians were among the most active foreign buyers of Spanish property. It is most likely associated with the fact the Romanians are among the largest expatriate communities in Spain. In 2020 there were 665,598 Romanian residents in Spain, as reported by the National Statistics Institute of Spain. They account for 12,3% of foreign residents in Spain and 1,4% of the total population.

Spain has been a widespread migration destination for Romanians since the 1990s. The movement of Romanians to Spain intensified in 2007 when Romania was accepted in the EU. However, in 2007 many EU countries imposed a moratorium that prevented Romanians from legally working in these counties. Spain was among the first countries to lift the moratorium in 2009, thus becoming a popular destination for Romanian migrants who wanted to move to the country with a more stable economic situation than their own. Romanian community remained “remarkably stable”, according to the Financial Times, even during economic crises that Spain has faced.

Foreign demand has made a significant contribution to the recovery of Spain’s real estate market in the 3rd quarter of 2020, although still restrained by the low international mobility throughout the summer. From July to September foreigners bought 42% more Spanish properties than in the second quarter.

Total purchases by foreigners over the last twelve months slightly exceeded 49,400, compared with just over 53,000 at the end of the 2nd quarter of 2020 and 61,000 at the end of the 1st quarter. Consequently, there has been a progressive decline in the purchase of housing by foreigners, which will remain until the pandemics’ problems are resolved, and international travel is resumed.

Share of residential property transactions closed by nationals from the top 10 most active countries, % (2009-2020) 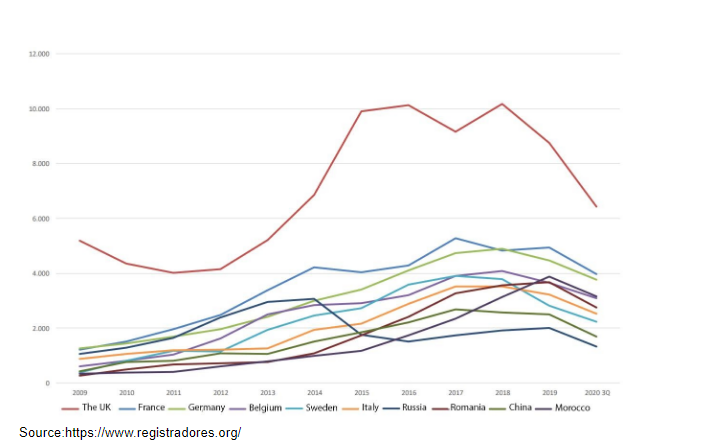 PM Citu: Budget proposal for 2021 would be finished, following discussions with authorising officers

TAROM to renew fleet this year

Starcom Romania Study: How Romanians’ consumer behaviour evolved in 2020 in relation to the digital environment and technology

Sphera Franchise Group achieves consolidated sales in Q4 up by 5.3% compared to Q3 and ends 2020 with results above...

Parliament considers the draft versions of the 2021 national and social security budgets. Orban: With exemplary mobilization we’ll be able...