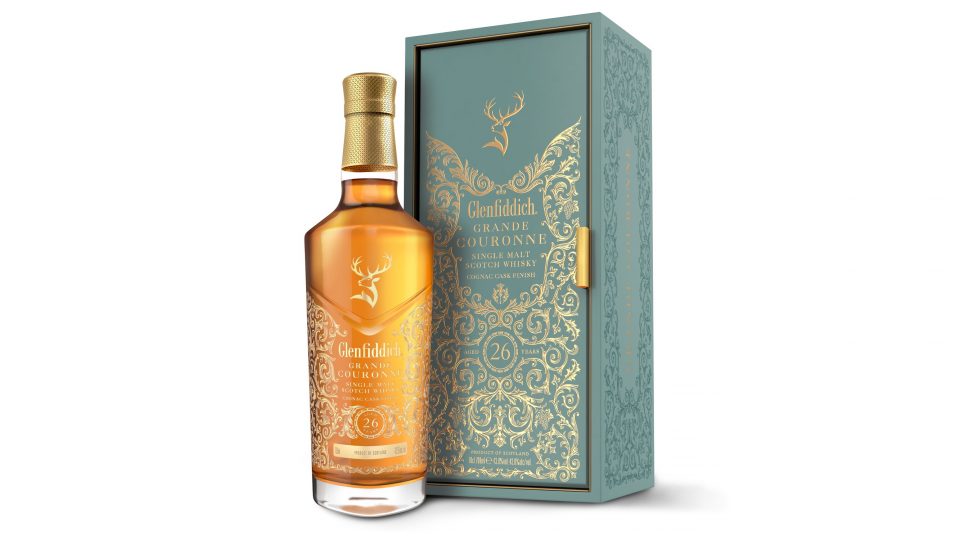 Matured for 26 in American and European oak casks and finished in rare French Cognac casks, Grande Couronne is a refined expression and is part of the “Grand Series” of the most awarded single malt Scotch whisky in the world . Grande Couronne will be available, in limited edition, on pre-order, starting from this month.

Alexandrion Group launches in Romania the most recent expression of Glenfiddich – Grande Couronne. Challenging the conventions in the category once again, Glenfiddich has managed to marry unexpectedly the most sophisticated flavors from Scotland and France, creating a drink that redefines luxury, captivates the non-conventional whisky lovers and crowns the most beautiful and special moments.

Grande Couronne is a refined drink, obtained through a long complex process which enhances its notes and increases its quality. Matured for 26 years in American and European oak casks at the Glenfiddich Distillery from Dufftown, Scotland, this single malt Scotch whisky is finished for 2 years in rare French Cognac casks, a process that intensifies its velvety sweet taste, with café crème and caramelized brown sugar aromas.

“The Grand Series perfectly encapsulates Glenfiddich’s spirit of innovation and our ability to experiment with aged liquid and intriguing finishes. Grande Couronne is the latest to exemplify that approach. It is the only Glenfiddich single malt that has matured in American and European oak casks and finished in rare French Cognac casks. The length of the finish, two years, is highly unusual and intensifies the velvety sweet taste with crème caramel and caramelized brown sugar aromas” said Brian Kinsman, Glenfiddich Malt Master.

“Alexandrion Group has one of the most complex and varied spirits and wine portfolios in the country, which includes both own brands, awarded in world-wide competitions, as well as import brands of certain strategically selected international producers. Glenfiddich Grande Couronne enriches this portfolio, and we are happy to be able to provide now Romanian consumers with a unique single malt Scotch whisky, in limited edition, which will certainly conquer even the most pretentious critics. Through the partnership with Glenfiddich, Alexandrion Group, which is also the only single malt whisky producer in Romania, significantly contributes to the development and competitiveness of this market compared with other European markets” said Stelios Savva, CEO Alexandrion Group.

An artistic design, in perfect harmony with the distinction of this single malt

Glenfiddich Grande Couronne instantly captures the eye through the impressive packaging design, a true work of art. The bottle and box are adorned with an iconic golden filigree and the inside unveils great renaissance paintings, transposing the consumer in a fascinating setting, with deep cultural and historical connotations, in prefect harmony with the strength and distinction of the most recent Glenfiddich single malt Scotch whisky. The inside of the box can be viewed in detail here.

The whisky is bottle in 700 ml bottles, with 43.8% ABV and will be available in Romania, starting from March, on pre-order on the website: www.iconicdrinks.shop.

Glenfiddich Grande Couronne will also be sold in other premium online and offline shops, starting from May.

The first Grande Couronne bottle in Romania, auctioned on April 28th by Artmark

Glenfiddich Grande Couronne was launched in Romania at the beginning of April, within an elegant event organized at the Auction House Artmark . The guests enjoyed this unique single malt and discovered its fascinating story in a safe environment, in which all the measures enforced in the current context were respected.

Charmed by the story and vibrant image of the new Glenfiddich Grande Couronne, the famous Romanian designer Alexandru Ciucu joined the project to add a local imprint to the launch. The designer reinterpreted the Scottish and French inspired iconic filigree, combining it with a Romanian symbol – the wolf head present on the Dacian flag- and created a unique pair of brass cufflinks that illustrate a synthesis of the Dacian-Celtic culture. The cufflinks will be offered to the winner of the auction for the reservation of the first Glenfiddich Grande Couronne bottle in Romania, organized by the Auction House Artmark, on April 28th .

The auctioned amount will be donated by the Cultural Center Foundation ArtSociety and will be directed towards a young artist support project.

Sodexo Romania Campaign: Over two million employees will have free access for one month to hundreds of free sports and relaxation classes

Banca Comerciala Romana, net profit up by 5.4pct in H1