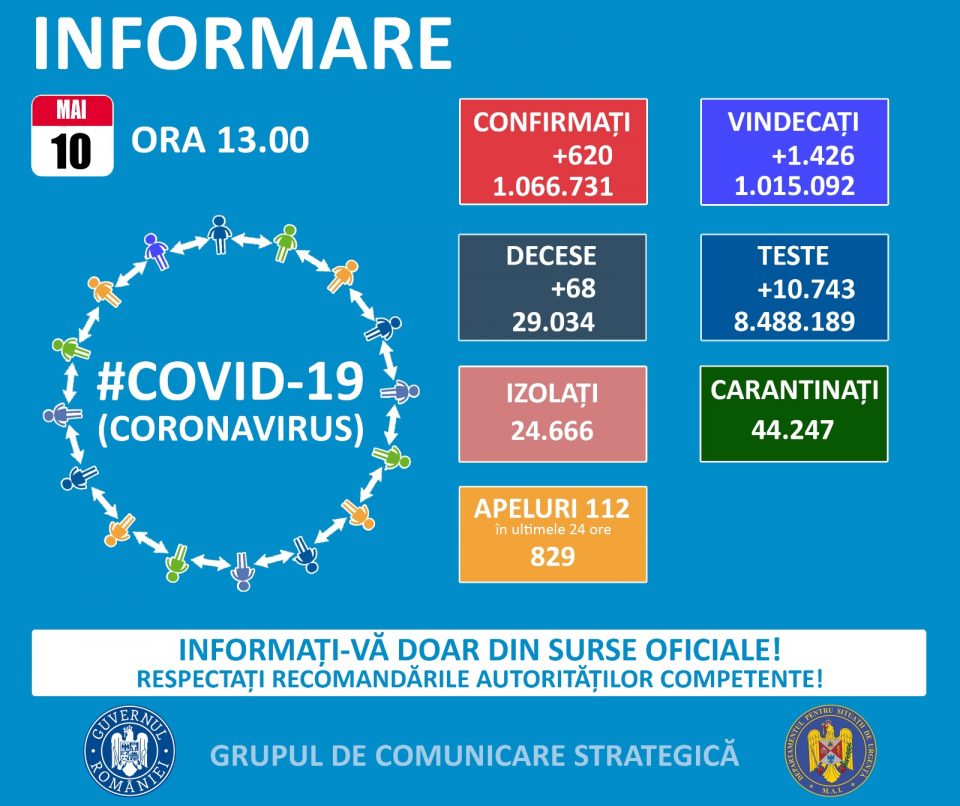 As many as 620 new cases of people infected with SARS-CoV-2 in Romania were recorded in the last 24 hours following over 10,700 tests nationwide, the Strategic Communication Group (GCS), the official novel coronavirus communication task force, reported on Monday.

These are cases of patients that have not previously tested positive.

Aside from the newly confirmed cases, following the retesting of patients who were already positive, 153 people were reconfirmed positive.

A number of 6,525 people with COVID-19 are hospitalised in the health units, out of whom 962 in intensive care, the Strategic Communication Group (GCS) announced on Monday.

In total, 18,035 people confirmed with SARS-CoV-2 infection are in isolation at home and 6,631 are in institutional isolation in Romania, GCS said.

Also, 44,097 people are in quarantine at home and 150 in institutional quarantine.

In the last 24 hours, 829 calls were registered to the 112 single emergency number.

A number of 68 people infected with SARS-CoV-2 have died in the last 24 hours, according to data transmitted on Monday by the Strategic Communication Group (GCS).

It is about 34 men and 34 women infected with the new coronavirus.

To date, 29,034 people diagnosed with SARS-CoV-2 infection have died in Romania.

Since the beginning of the COVID-19 pandemic until now, 190 Romanian citizens abroad have died.

Bucharest and Cluj County are still in the yellow scenario of SARS-CoV-2 infections, the Strategic Communication Group (GCS) announced on Monday.

The capital recorded an infection rate of 1.59 cases per thousand inhabitants, down from 1.65 – Sunday and 1.78 – Saturday.

Also in the yellow zone (incidence between 1.5 and 3) is the county of Cluj which registered a rate of 1.54 cases per thousand inhabitants, decreasing compared to Sunday when it registered 1.61.

According to GCS, the areas with most newly confirmed cases of SARS-CoV-2 infection compared to the last report are Bucharest – 185, Ilfov – 48 and Constanta – 38.

The fewest new cases were registered in the counties of Gorj – 1, Bacau, Covasna, Mehedinti and Salaj – 3 cases each, Maramures – 4.

Poland’s President Andrzej Duda starts official visit to Romania. Deepening strategic partnership and new sitting of the two governments in the second half of 2021, on the agenda of talks

Heroes Day marked with ceremonies to honour the sacrifice of those who served the country to defend the liberty, integrity and the dignity of the Romanian people