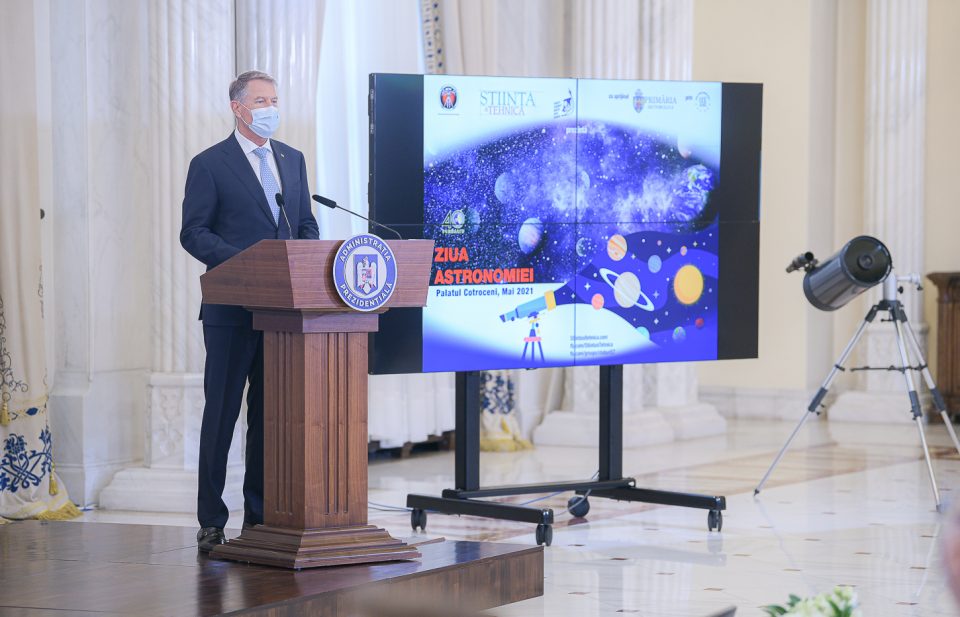 President Klaus Iohannis said on Monday that Earth has finite resources and that astronomy gives us hope for a future of discoveries that will deepen our knowledge of the world.

“Astronomy is not only one of the oldest sciences of mankind, but it is also one of the most challenging fields of thinking and research. Our planet has finite resources and we are always in a race against ourselves to manage them as efficiently as possible. Astronomy, however, gives us hope for a future of discoveries that will deepen our knowledge of the universe and, implicitly, of our world, as in the last decades European and international approaches of the peaceful exploration of space multiplied,” Iohannis told an Astronomy Day event hosted by the Cotroceni Presidential Palace as part of the AstroFest Festival held by the “Stiinta and Tehnica” magazine.

He said that education and research were and remain the path to progress and evolution, congratulating the students competing in the international Olympiads in astronomy and astrophysics in attendance.

“Behind your excellent results is a passion that I encourage you to continue to nurture. The performances of the young Gabriel Cristian Neagu, who has discovered several variable stars, are remarkable evidence of the connection between passion and research performance. (…) Dear students, you have in this room examples that can inspire you to dedicate yourself with passion to the field of astronomy and astrophysics. I want you to continue the journey started in Romania and get results that will make us proud,” said Iohannis.

He congratulated Professor Alexandru Mironov and the team of the “Stiinta and Tehnica” magazine on their efforts and dedication in support of scientific literacy.

He also congratulated Dumitru Prunariu, the first and only Romanian to fly to space.

“You are a genuine pioneer, the first Romanian to fly in space. Happy 40th anniversary of that historic moment! It is admirable the perseverance to dedicate your entire career to both space research and exploration, and the mission to help young people and society as a whole to become aware of the importance of this area. Your contributions to the development of Romania’s collaborations with international partners are of special significance,” said Iohannis.

Prunariu showed that Romania has been a member of the European Space Agency since 2012, but that in the last four years it did not pay its membership dues to this organization through which it is connected to major international programmes, including the US Artemis programme to return humans to the Moon.

“Romania is a part of these great projects. We hope that the problems overdue for four years by not paying our contribution to this international organization in which now, unfortunately, we no longer have the right to vote will be solved; I am convinced that, with some explanations and on these issues, to the incumbent government we will be able to overcome this stage, and the new selections of astronaut recruits that are taking place now – registrations ends on May 28 – will bring to the fore the possibility for a new Romanian to fly to space and walks in my steps. The past represents a landmark against which we are build the present and thinking about the future. We have great chances to develop ourselves technically and industrially through the institutions we belong to, coupled with international institutions,” he said, according to Agerpres.

Mironov said Prunariu pushed Romania into the “first league of lights,” adding that in Romania there are over 40 astronomy clubs.

Student Gabriel Cristian Neagu gave a presentation of the variable star “Romania” which is among approximately 100 variable stars discovered by him.

“Victor Gomoiu” Hospital, the first hospital for children built in Bucharest in the last 30 years, was inaugurated

SportsMin Novak attends start of the European Week of Sport: My term’s objective is to determine Romania to do sport

Iohannis, to Romanian community in USA: Romania is doing well, economy is growing

President Iohannis attends reception offered by President Biden in honour of the heads of delegations participating in the UN General...