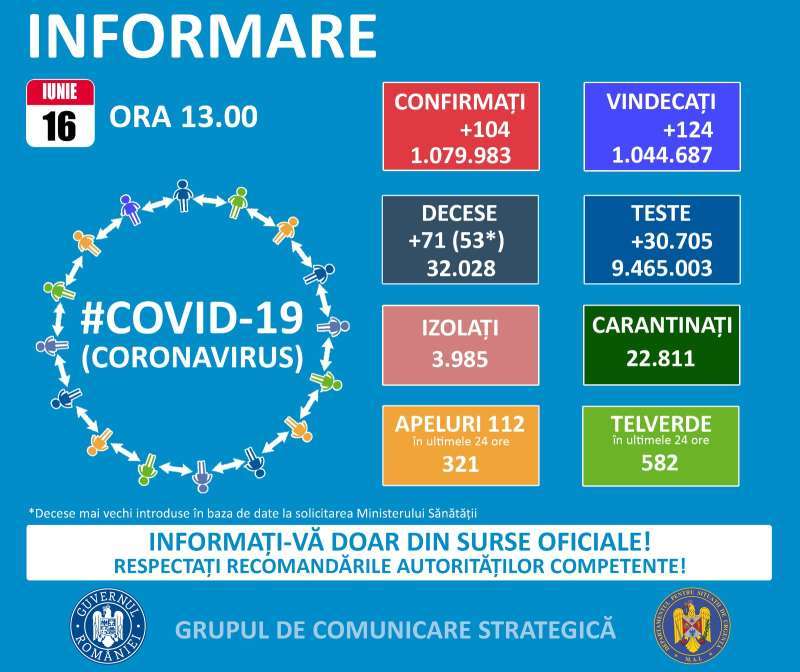 As many as 104 new cases of people infected with SARS-CoV-2 in Romania were recorded in the last 24 hours following 30,600 tests nationwide, the Strategic Communication Group (GCS), the official novel coronavirus communication task force, reported on Wednesday.

These are cases of patients that have not previously tested positive.

As of Wednesday, 1,079,983 cases of people infected with the novel coronavirus were confirmed in Romania. Of these, 1,044,687 were declared cured.

Aside from the newly confirmed cases, following the retesting of patients who were already positive, 43 people were reconfirmed positive.

192 patients – in intensive care in 985 hospitalizations

A number of 985 people with COVID-19 are hospitalized in the specialized health units, of whom 192 in intensive care, the Strategic Communication Group (GCS) announced on Wednesday.

In total, 2,695 people confirmed with SARS-CoV-2 infection are in isolation at home and 1,290 are in institutionalized isolation in Romania, GCS said.

At the same time, 22,727 people are in quarantine at home and 84 in institutionalized quarantine.

As many as 71 deaths – 37 men and 34 women – in SARS-CoV-2 patients have been reported in the last 24 hours, including 53 from 2020 and early this year that were entered in the database by the public health directorates at the request of the Health Ministry, the Strategic Communication Group (GCS), the official novel coronavirus communication task force, informs today.

68 of the victims had known underlying medical conditions, two did not suffer from comorbidities and for one there has been no such report so far.

All counties and Bucharest municipality remain in the green scenario from the perspective of infections with the novel coronavirus, the highest incidence per thousand inhabitants being in the counties of Prahova – 0.21 and in Alba – 0.21, the Strategic Communication Group announced on Wednesday.

Romania, the host of the 42nd edition of the Conventus Latin ORL

Vintu’s trial by the Bucharest Tribunal gets suspended

CNSAS to reverify Augustin Lazar following claims he refused to release anti-communist dissident from prison. Prosecutor General on accusations levelled against him: I have certain emotivity, certain agitation generated by these events