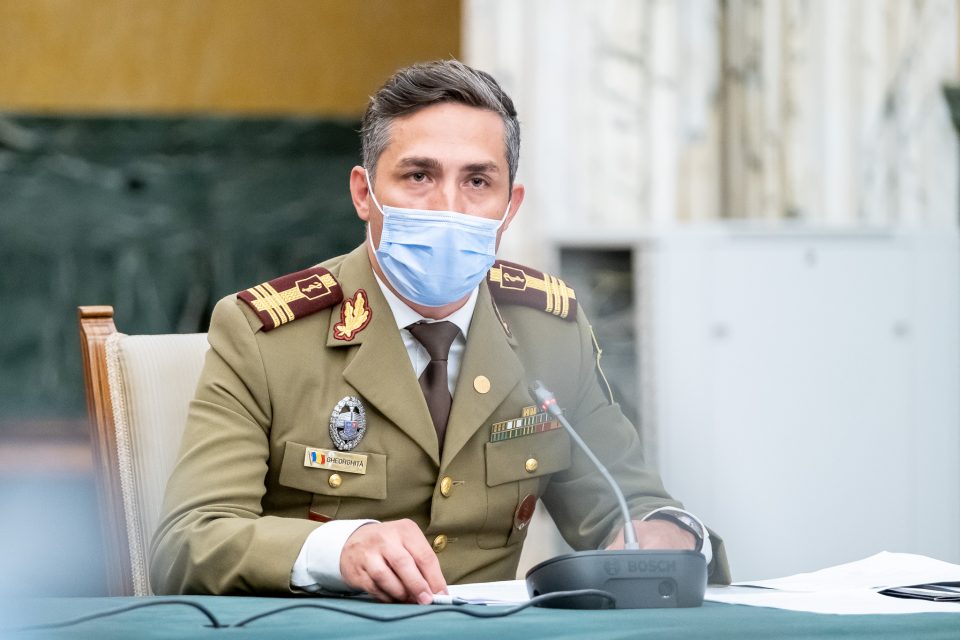 He also noted that, more than 4.95 million people were vaccinated nationwide with at least one dose, by the date of July 26, with more than 95pct of them being fully vaccinated.

Regarding the profile of the side effects recorded at the national level, the head of CNCAV said a total of 16,776 cases of post-vaccine side effects were reported, with a reporting rate of 1.79 per thousand doses administered.

Valeriu Gheorghita announced that  in September there will very likely be a decision on the administration of a third dose of COVID-19 vaccine to people at high risk of exposure, such as the healthcare workers, people with chronic diseases, those over 65 years of age.

“There are discussions at the moment about the administration of the booster or, as it is known, the third dose, although we are rightly talking about a booster and not the third dose in people who are at high risk of exposure – and here we are talking, for example, about the category of healthcare and social workers, and people who are registered with chronic diseases, as well as people over the age of 65. The decision to administer dose three or the booster will be very likely this September. Basically, it would come eight months into the vaccination campaign,” Gheorghita told a news conference at the Government House.

He added that the relevant officials will take into account the “history of the disease.”

“A person who has gone through the disease and has gotten vaccinated with two doses is not precisely required to get the third dose of the vaccine, given that having already been ill of COVIDF-19 is an important factor in activating the immune response,” said Gheorghita.

He added that, pending a national decision on the third dose of vaccine, “the authorisation by the European Medicines Agency of this immunisation schedule is expected.”

“We are particularly interested in safety data and immunogenicity data,” the military doctor explained.

Gheorghita also said on Tuesday that from August 2, in Romania, 12 to 17-year-olds will be able to be immunised against COVID-19 with the vaccine produced by Moderna, with appointments being available in the vaccination platform starting on August 1.

“On July 23, the European Medicines Agency approved the extension of the Moderna vaccine administration indication to the 12-17-year age group. As such, from August 2 in Romania the vaccine Moderna will become available for this age group. These days, the national appointment booking platform is being used to allow from August 1 booking appointments for those who want to be vaccinated with the vaccine from the Moderna company. Vaccination procedures and methods are similar to the population for over 18 years,” Gheorghita told a news conference at the Government House.

He added that the immunisation schedule is unchanged.

“It consists of two doses given in 28-day gap. The schedule and presentation of minors is similar to the vaccine from BioNTech/Pfizer in that minors are required to receive informed consent from next of kin relatives, parents or legal guardians, and it is important for the minors to be accompanied to the legal centres by the legal guardians. The vaccination will be performed at the same centres where we have the Moderna vaccine administered, including family physicians’ offices that get this type of vaccine,” Gheorghita explained.

Secretary of State with the Ministry of Health Andrei Baciu, CNCAV (Coordinating Committee for Vaccination Activities against COVID-19) vice-president, on Tuesday said that Romania has so far sold 1,170,000 doses of vaccine, donated some of the doses and has planned to donate more.

“We sold 1,170,000 doses of vaccine to Denmark, we donated over a half million doses to the Republic of Moldova, 100,800 to Ukraine, 30,000 to Argentina, and 50,4000 to Serbia. And these are only the agreements that were already finalized,” Andrei Baciu told a press conference at the Victoria Palace.

He also provided clarification on vaccine doses that are close to their expiration term.

“There are 1,400,000 doses that expire at the end of August. They expire every month, actually (…) So it’s a cycle, a life expectancy, so to speak, natural for all vaccines, not just for those who arrive in Romania, but for all those who are distributed at European level. Hence the importance of an efficient stock management,” Baciu also stated.

He said that for the next period, the authorities have estimated deliveries for July of 1,177,000 doses of vaccine.

“But we must keep in mind that we have suspended deliveries for some of the vaccines, precisely to have the most efficient management of stocks, and for August we have so far confirmed a delivery of 868,800 doses of Moderna. In fact, there will be 217,000 doses delivered weekly, while for the other vaccines produced by the other companies we are waiting for the confirmations, as a result of the suspension of deliveries for June and part of July,” Baciu also showed.

On July 25, the confirmation rate with worrying variants was 76pct, INSP states, in a note on its website.

According to INSP, at this point, “there is no evidence of sustained community transmission, at the national level, of the Delta variant.”

On July 25, 2,459 sequencings were reported to the INSP – CNSCBT (National Centre for Communicable Diseases Surveillance and Control). The seven laboratories that reported these results are the Cantacuzino Institute, the “Prof. Dr. Matei Bals” Institute, MedLife, the “Stefan cel Mare” University of Suceava, the “Stefan S. Nicolau” Institute of Virology, the CRGM of SCJU Craiova and “Pro Vitam” Sfantu Gheorghe.

Also, 35 confirmed deaths because of an infection with SARS-CoV-2 variants of concern were recorded and reported to the INSP – CNSCBT, of which 27 were cases of infections with the Alpha variant, three with the Gamma variant, and five with Delta variant.

Of the outbreaks, five were historically mentioned in India (3), Finland (1), and Turkey (1), according to the INSP.

Also, according to the same source, out of the 127 cases confirmed with the Delta variant, 15 (12pct) had been vaccinated against COVID (two incomplete and 13 complete).

The five deaths in Delta confirmed cases occurred in people not vaccinated against SARS-CoV-2 .

HealthMin Mihaila proposes series of measures to speed up the anti-COVID vaccination campaign: Rewards for the vaccinated, restrictions for unvaccinated

British and Commonwealth soldiers – commemorated on Sunday at Tancabesti Cemetery

Four schools from disadvantaged communities have been supplied with smart classroom equipment, within the project „The Future is at School”,...