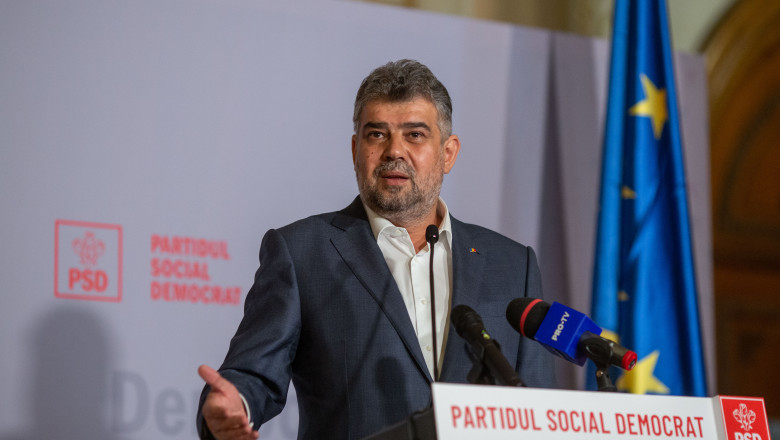 The chairman of the Social Democratic Party (PSD), Marcel Ciolacu, believes that this governing coalition made up of PSD, the National Liberal Party (PNL) and the Hungarian Democratic Union of Romania (UDMR) will last at least until 2024.

He was asked on Monday, at the end of the PSD’s National Political Council meeting, if, in a year and a half when the rotation at the head of the Government is to follow, the Social Democrats will still have the chance to give the prime minister and if he thinks that the current coalition PSD – PNL – UDMR will still exist then.

“I believe so … I am a man of good faith. I believe, first of all, that the Social Democratic Party had to enter the government and assume this entry into government, to stabilize Romania. I always set out with good faith in any political construction alongside my colleagues and my political opponents too, and I believe that this national coalition will last at least until 2024,” Marcel Ciolacu said.

Asked if there is a clearly established mechanism for rotation in government in the political protocol, he said: “Definitely, a date is also clearly mentioned, 25 May, when this rotation is to be carried out, through Parliament.”

Further asked to provide details about the rotation mechanism in government, Ciolacu explained: “I suppose it happens with the resignation of the Prime Minister, automatically the entire Cabinet falls and another Cabinet comes in Parliament with the government programme. We hope that the government program will be halfway after a year and a half.”

Relation with Ciuca, an  institutional one; we don’t have business and we’re not family friends

Marcel Ciolacu also  stated  that his relation with Nicolae Ciuca is an institutional one, mentioning that they don’t have business together, nor are they family friends.

He was asked what his relation with Prime Minister-designate Nicolae Ciuca is and how long they have known each other.

“We don’t have business, nor are we family friends. We are acquaintances, in the period I was deputy mayor of the City of Buzau we had an institutional relation. I was never with Mr. Ciuca at any anniversary, at any glass of wine or anything else or on any holiday. With Mr. Mihai Tudose I was at both Christmas and Easter, we saw each other with our families as well, so you have a comparison,” stated Ciolacu, on Monday, at the end of the meeting of the National Political Council of the PSD.

According to him, support for the PNL’s proposal for the position of Prime Minister comes following the fact that the PSD managed, as part of negotiations, to impose programme elements, starting with those relating to social packages.

Marcel Ciolacu was asked if the vote granted to Nicolae Ciuca by the Social Democrats comes following the fact that the head of state prefers the latter.

“No. (…) I believed, at this moment, that the Social Democratic Party has managed to impose its entire social package and not only that, we have amendments in agriculture, for example, in economy, in MIPE [e.n. – Ministry of European Investments and Projects] nearly 80 pct of the chapter is done by specialists from the Social Democratic Party; for us it mattered more than fighting for who will be Prime Minister first. Today, all the formations, after having statutory meetings, went to the President for consultations with a single proposal,” Ciolacu explained.

Ciolacu, also declared on Monday that the social-democrats were not the ones who presented their Prime Minister on the first rotation, although they were justified to do this because they won the parliamentary elections, because they decided that “measures for people are more important than transient positions”.

“There are already 80 days since Romania is in a political crisis. During this time thousands of people have died, and the majority barely has enough money to pay their bills. Right-wing parties did not offer a solution for exiting the crisis. PSD decided to take responsibility and to put an end to this political crisis. (…) Romania needs to be stabilized. PSD has negotiated programs and measures, our purpose was to impose PSD measures in the social, economic and health sectors. We did not enter to govern by putting other conditions. If these measures were not accepted in the governing program, PSD would not have accepted (…) I know that you will ask why PSD did not present the PM for the first rotation. Truly, PSD won the elections and was justified to do this. We made this concession because PSD decided that measures for people are more important than transient positions. In this moment of crisis, PSD needs to govern for Romanians, not to argue on positions or so-called Ministries with money,” Marcel Ciolacu said, in a press conference at PSD headquarters, at the end of the party’s National Political Council.

“I wish that other parties that form this national coalition to show the same political maturity that my colleagues showed,” he said.

Asked about what recommends Vasile Dincu to be the Minister of Defence, Ciolacu replied: “I am firmly convinced that in the following period Vasile Dincu will come before you and will present his program at the Ministry of Defence, after he will be sworn in, or perhaps before the swearing in. (…) We all know well that the Ardeal region is not PSD’s electoral fief, but needs to be represented in this Government, and the decision of several entities in Ardeal was for Vasile Dincu to represent them in the future Government. This seems like a right, responsible decision. (…) The majority decision was that Dincu will be chosen, from PSD, to occupy the portfolio of Minister of Defence.”

Budget amendment for pensions and allowances to be adopted next Monday

PSD chairman also said that a budget amendment aimed at the allocation of funds necessary for the payment of pensions and allowances should be prepared as early as this week, so as to be adopted next Monday.

Asked about interim Minister of Labor Raluca Turcan’s allegation that starting with Friday, there will be no more money for pensions and allowances, the leader of the Social Democrats answered: “I believe that tomorrow our nomination as Minister of Finance must meet with Mr. Dan Vilceanu, the head of the Ministry of Finance, together with the specialists from the Ministry of Finance, and to prepare this budget amendment for Monday. I repeat, we told you three months ago that money was taken from pensions. I saw that this news came from Mrs. Turcan, I respect her, I have no problem, but I want to tell you when you promote that a certain amount be taken from the ministry fund and you sign this, when you are a minister, you forget that you are a party member and say what’s best for Romanians, you don’t complain afterwards.”

The United Nations and global health

Chamber of Deputies votes for vacation of Becali deputy seat