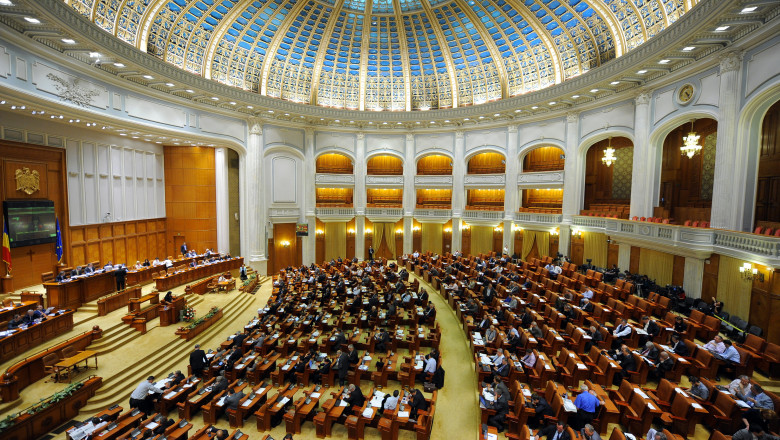 The Senate and the Chamber of Deputies meet today in a joint session to vote on a government put forth by Prime Minister-designate Nicolae Ciuca.

Prime Minister-designate Nicolae Ciuca will unveil a governing agenda and a list of the members of his Cabinet. Debates will take place, followed by Parliament’s vote of confidence on the agenda and the entire Cabinet list.

According to the Constitution and the Rules of Procedure, Parliament shows its confidence in the government by a vote of the majority of the MPs and senators in a secret ballot.

At least half plus one of the members of the two houses of Parliament must be in attendance.

In order to clear the vote, the Ciuca Government needs 234 for votes. But the Ciuca Cabinet is endorsed by the Social Democratic Party (PSD), the National Liberal Party (PNL), the Hungarian Democratic Union of Romania (UDMR) and national minority MPs, all holding 321 seats among themselves, which ensures a comfortable majority.

On Tuesday, Ciuca submitted to Parliament the list of ministers and a governing agenda.

The list of the PNL-PSD-UDMR government is as follows:

On Wednesday, the picks for the Ciuca Cabinet were heard by the specialists committees of Parliament, and all of them cleared the hearings. The opinion of the committees is consultative.

In case of adoption, the decision of Parliament on extending its vote of confidence will be forwarded immediately to the head of state to proceed with the appointment of the government.

After the government receives the vote of confidence from Parliament, the prime minister and the ministers will take the oath of office individually before the President of Romania.

The government as a whole and each member will be considered in office from the date of taking the oath.

Ciuca: Gov’t I propose will guarantee the stability and development of Romania

Prime Minister-designate Nicolae Ciuca said his Government will provide predictability and guarantee Romania’s stability and development through all measures it will take.

“Today we are in a moment long awaited by all Romanians, one in which we can finally offer predictability and guarantee Romania’s stability and development through all the measures we will take for the good of the citizens. I want it to be the first day of an approach to governing the country. Together with all the ministers in this government, I pledge to do everything in our power to improve Romania’s economic, social and health situation,” Nicolae Ciuca said Thursday in Parliament’s sitting for the investiture of the Government proposed by him.

The prime minister-designate added that through the proposed government program, the interests of the Romanians and the guarantee of success in several directions of action are on the first place.

“The first refers to investments, those without which Romania cannot recover and cannot achieve the objectives we all want. Our common goal is to modernize Romania and that is why we will allocate 7% of GDP to investment, money which will go mainly to infrastructure projects, but also to the administrative units (…)”, said Ciuca.

The prime minister-designate specified that the second direction of action of the Government is related to the connection through infrastructure of the historical regions, by continuing the investments in the construction of highways, railways and means of intermodal transport until 2024, as well as geographical balance, infrastructure, strengthening the economic and strategic position of the Constanta Port.

Ciuca added that the third direction refers to “the balanced and cohesive development of Romania”.

“No region should be left behind in terms of transport infrastructure development. This is a commitment we make,” Ciuca said.

We will keep flat tax, we will encourage local capital

Prime Minister-designate Nicolae Ciuca said on Thursday that his flat tax rate would be maintained in his government, that local capital would be encouraged through concrete measures and that work would also be done to create a brand identity for Romania.

“A strong state is a state that supports the business environment and it is his fair, predictable and friendly partner. We will keep the flat tax rate and we are against raising taxes and duties. Our role is to encourage the development of entrepreneurship, and this cannot be achieved by increasing the pressure on economic operators, who are already severely affected by the negative impact of the pandemic on their businesses. A prosperous business environment is one that provides jobs.We will encourage, through concrete measures, domestic capital and we will work for the creation of a brand identity for Romania, which will contribute to the creation of a positive image of our country in relation to the potential partners,” Nicolae Ciuca told Parliament’s sitting for the investiture vote on the government proposed by him.

He also referred to the active role that tourism must play in creating Romania’s image.

“Tourism must play an active role in creating Romania’s image, as an integral part of the process of increasing the attractiveness of our country, by more efficiently highlighting the natural, cultural and human heritage, by emphasizing Romanian values, talents, traditions and customs. We will implement a functional partnership, which will contribute to ensuring the good collaboration between the private and the public environment,” Ciuca added.

PNRR is the main axis in achieving our objectives

Prime Minister-designate Nicolae Ciuca said on Thursday that the National Recovery and Resilience Plan (PNRR) is the “main focus” in achieving the objectives of the government he will lead.

“The next direction focuses on the National Recovery and Resilience Plan. PNRR is the main axis in achieving our objectives. The use of this European money is closely linked to the observance of a well-established schedule and the implementation of reforms to improve institutional capacity, corporate governance, digital transformation of transportation and increased safety in the area, as well as to meet the European goals for the decarbonisation of transport, and environmental protection, with increased attention to climate change,” Ciuca told a plenary sitting of Parliament on Thursday in seeking a vote o confidence on his Cabinet.

He added that the process of modernising Romania also requires concrete and urgent measures for the digital transformation of public services in an attempt to bring them closer to the citizens.

With regard to healthcare, he said the government would develop a fair program for unrestricted and uninterrupted access to healthcare services.

The citizen is and will be front and centre in the governing act as its beneficiary, said the prime minister-designate.

He added that more attention needs to be paid to families and support for them.

Turcan on reimbursement of sums spent in campaign: In the following days, PNL to receive at least as much as PSD did

Measures to contain the spread of Omicron variant: People entering Romania to complete a passenger locator form from December 20;...

Following the confirmation of the first two cases of Omicron in Romania, PM Nicolae Ciuca convenes working meeting with the...

EnvMin Tanczos: Romania has permanently two of three industrial plants for which it has been referred to court