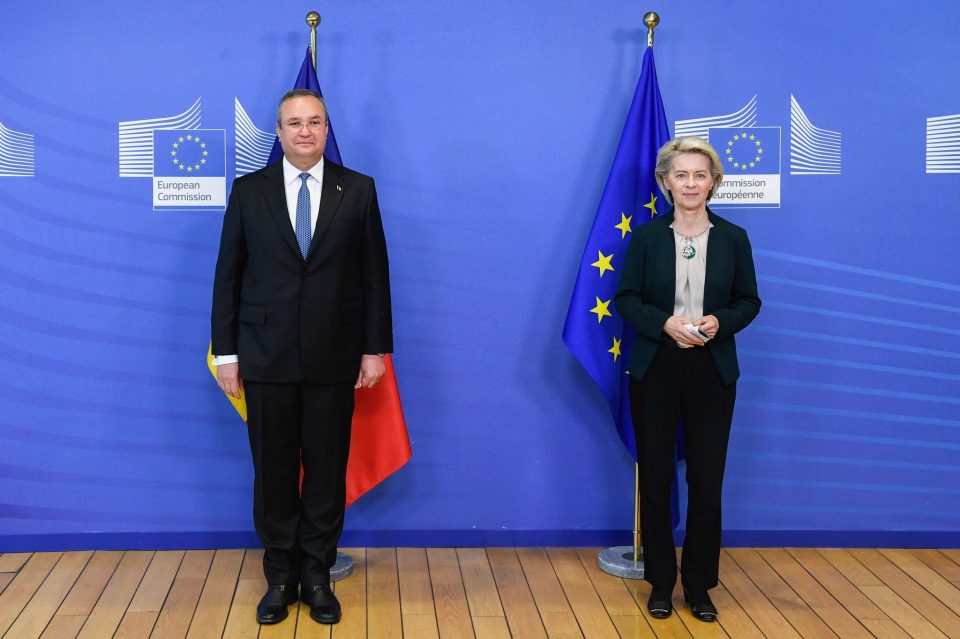 Prime Minister Nicolae Ciuca presented the Romanian Government’s priorities for the next period during the meeting he had, on Tuesday, with the President of the European Commission, Ursula von der Leyen, in the context of his visit to Brussels.

According to a Government press release, the Prime Minister referred to the efforts to manage the pandemic, both in terms of health and in view of the economic and social implications, and thanked the President of the Commission for the involvement of the European institution in supporting these efforts, including the vaccination campaign in Romania.

“The Romanian prime minister also presented the economic recovery efforts, based on the National Recovery and Resilience Plan, and underlined the concern for ensuring fiscal-budgetary stability, an objective reflected in next year’s budget projection. In this regard, he gave assurances as to the Government’s determination for the adoption of the necessary measures for accessing the funds available through NRRP,” the release shows.

In the talks with the President of the EC, Prime Minister Ciuca assured of the full availability of the Romanian Government for open and constructive cooperation with the European Commission in order to fulfill the common European commitments and objectives.

With regard to the priorities of the European agenda, the cited source stated, the head of the Executive said that Romania supports the efforts to advance European policies in order to strengthen the resilience of the Union, following the lessons learned from the pandemic, so that the Union and the Member States have effective tools and solutions to enable them to be better prepared for any challenges or crises in the future.

He also emphasized the special contribution of an “integrated, unbroken” Schengen area to the objective of consolidating the internal market, and in context, he reiterated the call for “a decision to be made as soon as possible on Romania’s accession to the Schengen area”, while thanking European Commission for its constant support in this endeavor, reconfirmed at the meeting with the President of the Commission.

At the same time, Prime Minister Ciuca recalled Romania’s objective of finalizing the Cooperation and Verification Mechanism, underlining the Government’s commitment to promote the necessary reforms in this regard.

He also referred to the Union’s major objective of a dual green and digital transition, giving assurances regarding Romania’s support for its advancement, as a prerequisite for the future development of the Union and its Member States, for adapting to the demands of a future economy.

“At the same time, Prime Minister Nicolae Ciuca maintained that the solutions to be be formulated at EU level to achieve these objectives must be balanced, adapted to the economic and social realities of the Member States, including Romania, so as not to present the risk of accentuating the development differences within the Union and affect the economic stability of the Member States. Prime Minister Ciuca reiterated the importance of adopting as soon as possible a complementary delegated Act on EU taxonomy, including natural gas and nuclear energy,” the release further mentions.

The cited source states that the discussions with the President of the European Commission also addressed aspects of the Union’s external agenda, especially in the context of the worrying developments in Ukraine and those on the EU’s border with Belarus.

In this context, Prime Minister Nicolae Ciuca expressed concern over Russia’s military actions in Ukraine and the Black Sea area, calling for a united and strong message from the EU aimed at discouraging an escalation of the security situation.

According to the release, the President of the European Commission gave assurances as to the seriousness with which the European institutions are considering this file and also with regard to the close coordination of the action with the United States and the other partners, reiterating the common message that if the situation continues to escalate, there will be major costs for the Russian side.

“The Prime Minister of the Romanian Government also referred to the importance of supporting the efforts of European integration of the Republic of Moldova, respectively of deep democratic reform, initiated by the Chisinau Executive, including in terms of ensuring energy security. In this regard, he agreed with the President of the European Commission, Ursula von der Leyen, who thanked Romania for its support to the Republic of Moldova during the recent energy crisis, to continue the joint action in support of Chisinau’s efforts,” according to the same source.

Ciuca, NATO SecGen tackle European security, with a focus on tensions in Romania’s neighbouring areas and at Ukraine’s eastern border

ForMin Aurescu: The visit of four Romanian MPs to the Russian Embassy has no official value

Klaus Iohannis welcomed with 21-gun salute at the Tomb of the Unknowns in Arlington National Cemetery. Combating terrorism and transatlantic solidarity, among topics tackled during Iohannis – CIA Director meeting