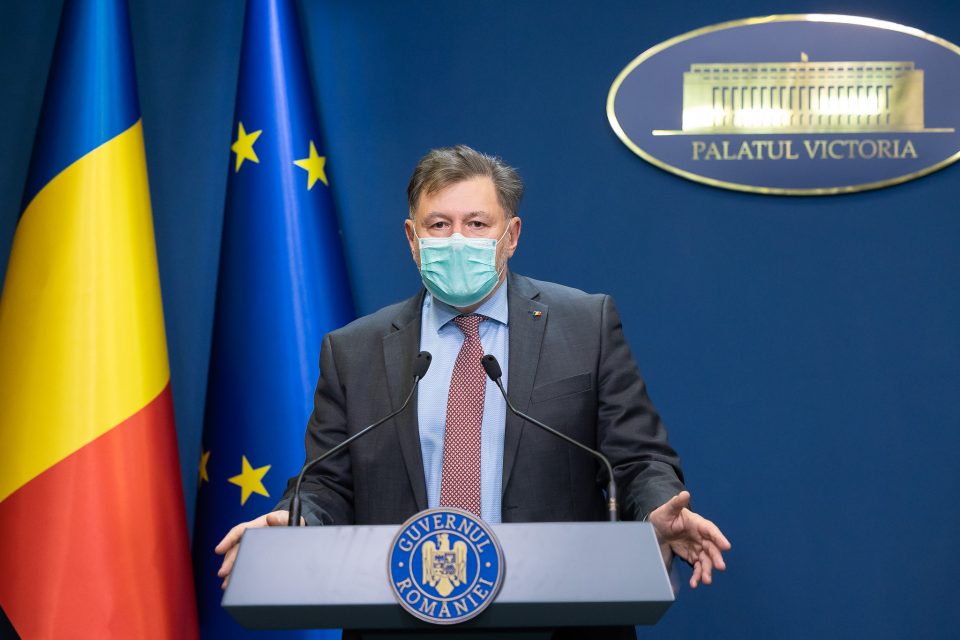 The number of new COVID-19 cases in Romania is increasing rapidly from January 1 to the present.

While on the first day of the year, 1,451 people infected with SARS-CoV-2 were registered, within 24 hours, ten days later the number of new cases reached 8,861 on Tuesday.

Romania has entered the 5th wave of the COVID-19 pandemic, Health minister Alexandru Rafila (photo) said on Sunday evening, stating that there is a sporadic transmission of the Omicron variant of SARS-CoV-2, but it is estimated that in one to two weeks there will be a sustained community transmission of this strain.

“We are on one of the fastest growth trends in Europe and I am not just talking about the European Union, we are in second or third place, so we have no reason to relax, but on the contrary we must be extremely careful,” the minister said, according to Agerpres.

New COVID-19 cases from the beginning of the year to the present:

8,861 new cases of people infected with SARS-CoV-2 were recorded in the last 24 hours following over 73.000 tests carried out nationwide

As many as 8,861 new cases of people infected with SARS-CoV-2 were recorded in the last 24 hours, 4,757 more than the previous day, with more than 73,000 tests being carried out, the Strategic Communication Group (GCS) reported on Tuesday.

Of the new cases, 991 are in patients who are reinfected, tested positive at a period of more than 180 days after the first infection.

As of Tuesday, 1,857,502 cases of infection with the novel coronavirus have been registered in Romania, of which 15,459 are in reinfected patients, tested positive at a period of more than 180 days after the first pass through the disease.

Apart from the newly confirmed cases, following the retesting of patients who were already positive, 468 people were reconfirmed positive with COVID-19.

As many as 43 deaths – 22 men and 21 women – in patients infected with the novel coronavirus have been reported in the last 24 hours, the GCS reported.

According to the GCS, 41 of the deaths were recorded in patients who had a medical history, one deceased patient had no comorbidities, and for another, no comorbidities have been reported so far.

Of the 43 deceased patients, 38 were unvaccinated and five were COVID-19 vaccinated. The five patients vaccinated were aged 50 to 59 years and over 80 years and had comorbidities.

Since the beginning of the pandemic, 59,070 people diagnosed with SARS-CoV-2 infection have died in Romania.

As many as 3,023 people infected with SARS-CoV-2 are hospitalized in health facilities, of which 173 are children, GCS said.

According to GCS, 415 patients are hospitalized in the ICU wards, including eight children. Of the patients admitted to intensive care, 30 have a certificate attesting to the anti-COVID vaccination.

According to the data existing in the alerte.ms application, at national level, there are 1,271 ICU beds for COVID-19 patients, of which 311 in Bucharest.

The law enforcement staff applied, in the last 24 hours, 1,283 contravention sanctions, totaling 310,850 RON, as a result of violating the provisions of Law 55/2020 on some steps to prevent and combat the effects of the COVID-19 pandemic, the GCS reported on Tuesday.

Also, through the competent structures of the Police, a criminal file was drawn up for the prevention of diseases, an act provided for and punished by article 352 of the Criminal Code.

Health Ministry: First tranche of the anti-COVID vaccine for children between 5 and 11 years old will be delivered to Romania between January 21 and 25

Stada Romania announces an investment of 48.3 million euros in a new factory, in Arieș Industrial and Logistics Park, Turda,...

Day of the Unification of the Romanian Principalities: Speakers of the two Chambers emphasize need of unity and stability