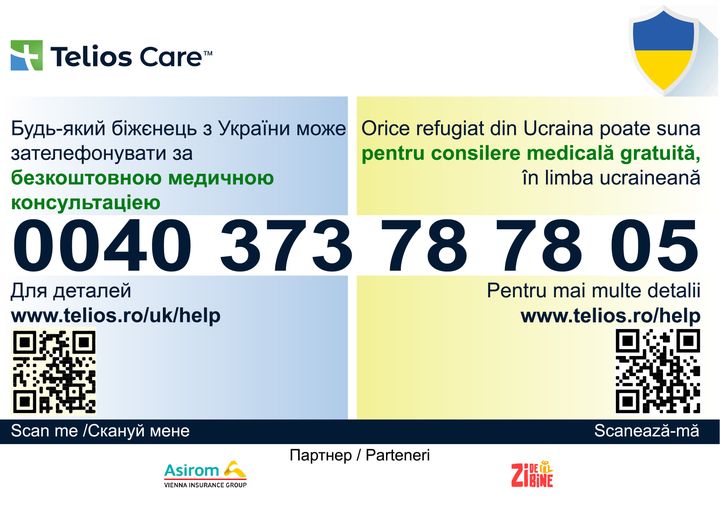 Refugees from Ukraine will have access to medical consultations by telephone in Ukrainian for general medicine and paediatric care, the ZI de BINE Association reports in a press release to Agerpres.

The national telephone number 0040 373787805 is toll free and available 24/7. The hotline was opened by the Zi de BINE association in partnership Telios Care, a company that provides telemedicine services.

The release carries data provided by the Romanian Border Police that show approximately 400,000 refugees from Ukraine have arrived in Romania since the outbreak of the war. Almost 305,000 people have already left for other countries, while 95,000 have remained in Romania.

“We cannot imagine what is in the hearts of people who are fleeing to save their lives and who are forced to leave behind their fathers, brothers, wives and other family members. But we can understand that now is the time, again to help. This time by a customised telemedicine service, which will provide them with the medical information they need, in the language they speak,” according to Melania Medeleanu and Luciana Zaharia, founders of the Zi de BINE association.

Early this March, together with partners and donors, the association sent almost 100 tonnes of products to both sides of the Romanian-Ukrainian border – food, medicine, blankets, personal care products, etc.

Currently, the association is setting up in one of the transit centres in Iasi playgrounds for children and recreational areas for mothers, while in Bucharest, on April 1, it will open the gates to a Zi de BINE community centre designed for the Ukrainian community.

Crown Custodian Margareta visits Isaccea border crossing point: Romania is an example in terms of the support granted to the Ukrainian refugees