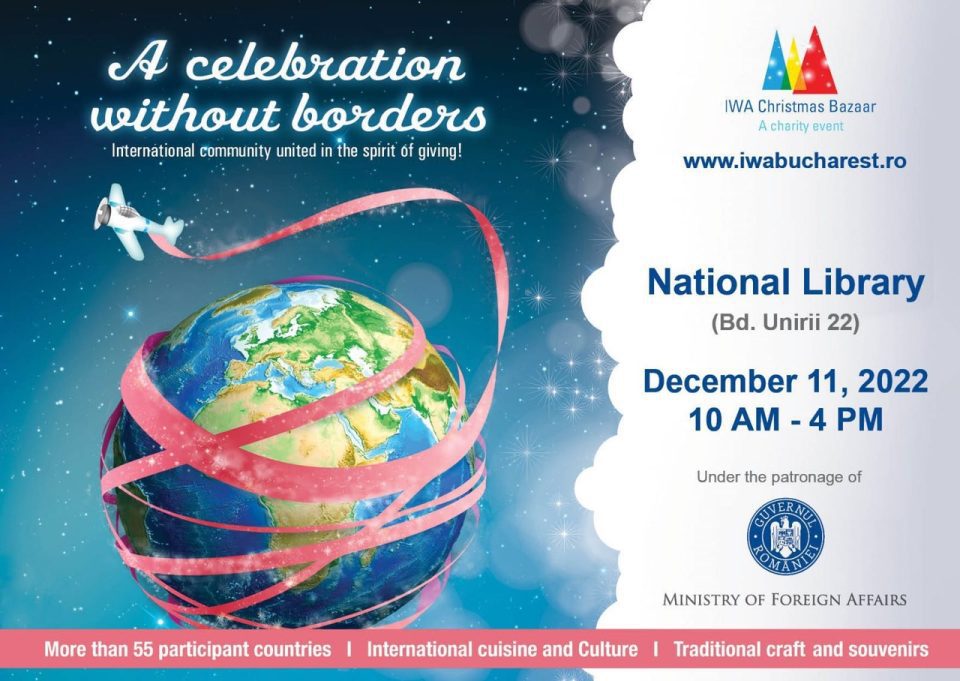 The 30th edition of the Diplomatic Christmas Bazaar, “IWA Christmas Bazaar”, a charitable event organized every year by IWA – the International Association of Romanian Women under the auspices of the Ministry of Foreign Affairs will take place on Sunday, December 11, 2022, between 10:00 a.m. and 4:00 p.m., at the National Library of Romania, Bd. Unirii no. 22.

The 30th edition of the Bazaar, a special edition also due to its anniversary character, promises to be a unique experience for those willing to find special gifts from over 60 countries, to enjoy a multicultural atmosphere and at the same time to contributes to the support of people in difficulty.

To make this edition a success, around 600 volunteers from over 60 nations joined forces in the name of solidarity, empathy, diversity and cultural diplomacy. Thus, the participating public will enjoy music and dance programs, demonstrations of crafts and culinary customs, presentations of traditional objects, specific to each culture represented, all offered through the generosity of the 60 countries that have chosen to be creatively involved in the organization this event.

Marina Coandă Bundac, the coordinator of the last 10 editions of the Christmas Bazaar, confesses that the organization of this edition was a challenge: “After two years of reinventing the Bazaar in a hybrid format, I waited both impatiently and with emotion for this edition. Together with the accredited diplomatic missions in Romania, as well as with representatives of the expat community, we joined forces and managed this year, through perseverance and solidarity, to present the Bazaar to the public in a new location and to prepare numerous surprises at the countries’ stands participants, as well as vibrant moments on the event stage. I want to thank everyone who made this special exercise of public and cultural diplomacy possible”.

Every year, the international community in Romania responds to IWA’s invitation to support local projects in which the organization is involved. Funds collected from the sale of traditional products of the participating countries and from sponsorships will be redirected to associations that support people in need.

IWA – The International Women’s Association of Romania is a non-governmental and non-profit organization established in 1978. IWA is made up of members from the Diplomatic Corps accredited in Romania, but also from the civil – cultural or business community -, representing over 60 countries.

INSCOP: Over 70pct of Romanians agree that Schengen accession criteria are met

Megadeth to play on June 17 within OST Fest